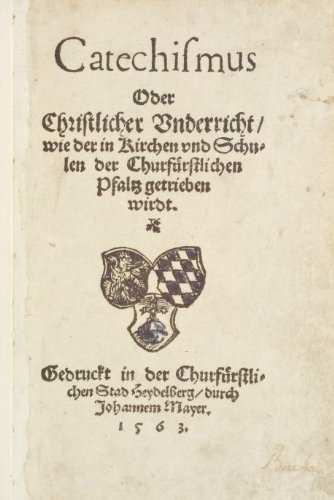 The catechism knows we are not our own, and that this truth provides comfort insofar as we are able to surrender—in our living and in our dying—to the gracious God who created us, the suffering Savior who redeemed us, and the Spirit who daily wrestles to sanctify our selves, our substance, and our society.

I have no doubt that the Heidelberg Catechism is a useful and relevant tool for forming individuals and congregations in a shared understanding of Reformed faith and practice, but our ways of handing over this faith require some rethinking. Gone are the days when kids would memorize huge chunks of doctrine because the church knew it would be good for them!

The catechism is a theological bouillon cube—a dense, compact presentation of the biblical witness from a Reformed perspective. Rather, we mix them with water and other ingredients so that their flavors can spread out. Similarly, the treasures of the catechism are best received in the church when we mix them with weekly worship, Scripture, and daily life.

This is evident in the story of my confessing the catechism in Sunday worship. More fundamentally, however, the catechism as a whole provides theological reflection on the key actions of Reformed worship. Educational theorists know we learn best by doing. Through the practices of speaking, hearing, or praying these age-old words, of tasting and seeing the promises of God in bread, wine, and baptismal waters, we are in-formed. The Spirit uses these gifts to inwardly form us as the people of God. What does it mean to confess that Jesus descended into hell?

What is God doing through the waters of baptism? Why do we eat this bread and drink this cup? What does it mean to steal or bear false witness against a neighbor? Why do we pray? Formal instruction flows from and deepens our participation in worship. As a condensed retelling and interpretation of the biblical story, the Heidelberg Catechism is most helpfully engaged with explicit reference to Scripture. This can and does happen in worship, but in educational settings we have a sustained opportunity to enter the catechism through Scripture.

By approaching the catechism through the biblical narrative we put flesh on the bones of doctrine. All of its questions and answers link our lives to the Word of God, the great and grand story of divine love in action.